Violent Protests and Political Tension | In a Heartbeat
Skip to content 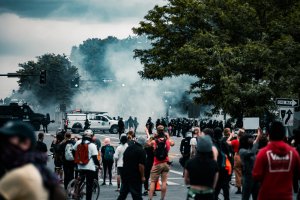 Protests happen all over the world on a daily basis. If you take the ten largest from recent history, you’ll realize that almost half of them occurred in the US — Earth Day in 1970, Anti Iraq War in 2003, Women’s March in 2017, and Black Lives Matter in 2020. While the purpose of most protests is peace, education, and unity, things can become violent at times. In 2020, at least 25 people lost their lives due to political unrest in the US. Even if you don’t participate in rallies yourself, you could still be vulnerable when peaceful protests turn violent.

Why Do People Protest?

With the First Amendment, Americans have the freedom of speech, the press, assembly, and the right to petition the government for a redress of grievances. Therefore, when controversial events occur and become highly publicized, the scales are tipped and people can unite together to fight for change. In the US, people often come together collectively to address shared issues through political activism and protest. The shared identity, purpose, courage, and resentment mobilize people to face their helplessness and vulnerability.

Why Do Some Protests Turn Violent?

Outrage — it’s usually the initial response to issues of injustice, abuse, inequality, and other catalysts. Although many people feel passionate about their cause and march to protest, they often do not turn violent. So why are some demonstrations peaceful and others destructive?

How to be Safe During a Protest

Protests are inevitable. Whether you participate in one or not, you will witness or be close to one at some point in life. So how do you keep yourself safe from potential violence in protests?

When participating in a protest

As long as we live in a world where injustice occurs and where voices continue to go unheard, protests are bound to happen. While we root for people to stand up for what is right, we can only hope that it does not turn into chaos. In the event that a peaceful protest turns violent, you need to be sure to keep your community, school, workplace, or congregation safe. Our new program for unexpected active violence in everyday life, SAVE, may be very helpful in these situations. Contact us today at https://inaheartbeatllc.com/contact/ to learn more about our Surviving Active Violence & Emergencies group classes.